Link to: Most ‘Medieval’

So for those of you who don’t live in Washington State or Colorado or others who are a little miffed at this example, let’s just put it this way. P/Es of 3 or P/Es of 15 or P/Es of 0 are intimately connected to the amount of available credit. So are interest rates. If there was only one dollar to lend and someone was desperate to have it, the interest rate would be usurious. If there was one trillion dollars of credit and no one was eager to borrow for some reason or another, then the rate would be .01% like it is today and for the past five years in my personal money market account. The amount of credit and its growth rate are critical to asset prices, and of course asset prices in our modern economy are critical to growth and job creation and future prospects for investment. We have a fiat/credit/debt-based economy that depends on the continuous creation of more and more credit in order to thrive and some would say – even survive. We need those pigs and more of them. And they need to circulate and be traded – what some would call “velocity” – in order to keep the economy growing. Our South Sea island economy never did change until the new crop was discovered, but concurrently, not until the pigs started to be traded for it.

And so? Well, to use the U.S. as an example, we officially have 57 trillion dollars’ worth of credit (stocks not being part of the Fed’s official definition) and probably 20 trillion more in what has come to be known as the “shadow” system. But call it 57 trillion because the Fed and Chart 1 do. 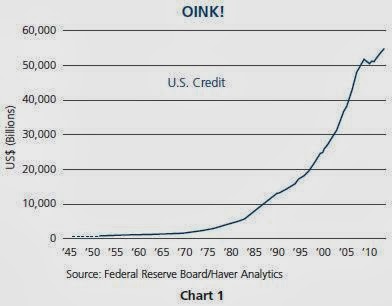 It used to grow pre-Lehman at 8–10% a year, but now it only grows at 3–4%. Part of that growth is due to the government itself with recent deficit spending. A deficit of one trillion dollars in 2009–2010 equaled a 2% growth rate of credit by itself. But despite that, other borrowers such as households/businesses/local and foreign governments/financial institutions have been less than eager to pick up the slack. With the deficit now down to $600 billion or so, the Treasury is fading as a source of credit growth. Many consider that as a good thing but short term, the ability of the economy to expand and P/Es to grow is actually negatively impacted, unless the private sector steps up to the plate to borrow/invest/buy new houses, etc. Credit over the past 12 months has grown at a snail’s 3.5% pace, barely enough to sustain nominal GDP growth of the same amount.

Is there a one-for-one relationship between credit growth and GDP? Certainly not. That is where velocity complicates the picture and velocity is influenced by interest rates and the price of credit. But with QE beginning its taper, and interest/mortgage rates 150 basis points higher than they were in July of 2012, velocity may now negatively impact the equation. MV=PT or money X velocity = GDP is how economists explain it in old model textbooks. Actually the new model should read CV=PT or credit X velocity = GDP but most economists are classically trained to the Friedman model, which viewed money in a much narrower sense.

So our PIMCO word of the month is to be “careful.” Bull markets are either caused by or accompanied by credit expansion. With credit growth slowing due in part to lower government deficits, and QE now tapering which will slow velocity, the U.S. and other similarly credit-based economies may find that future growth is not as robust as the IMF and other model-driven forecasters might assume. Perhaps the whisper word of “deflation” at Davos these past few weeks was a reflection of that.

The Bill Gross piece reminded me of this quote from Richard Duncan, which I had posted previously:

“Total credit in the United States surpassed $1 trillion for the first time in 1964. Over the following 43 years, it increased 50 times to $50 trillion in 2007. That explosion of credit changed the world. ” –Richard Duncan, The New Depression