Just a couple of charts from the Federal Reserve Bank of St. Louis that I wanted to have chronicled here. It is hard not to be concerned about inflation (eventually) when one sees charts like these. Granted it may take a while to show up, but Mr. Buffett and Mr. Munger are already warning about how severe it could be, so it is probably best to adjust the types of companies on which you spend your time researching ahead of time. Below the charts are some of Buffett’s comments on inflation over the years that I copied from a previous post.
St. Louis Adjusted Monetary Base (BASE) 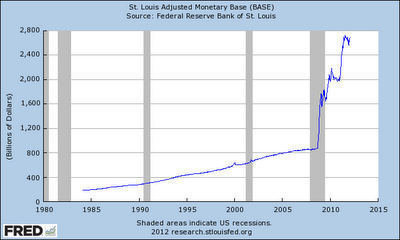 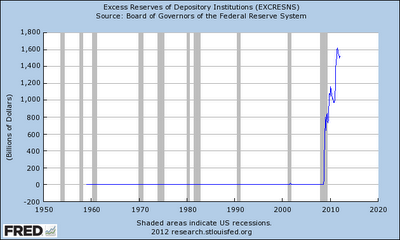 In fairness, we should acknowledge that some acquisition records have been dazzling. Two major categories stand out.

The first involves companies that, through design or accident, have purchased only businesses that are particularly well adapted to an inflationary environment. Such favored business must have two characteristics: (1) an ability to increase prices rather easily (even when product demand is flat and capacity is not fully utilized) without fear of significant loss of either market share or unit volume, and (2) an ability to accommodate large dollar volume increases in business (often produced more by inflation than by real growth) with only minor additional investment of capital. Managers of ordinary ability, focusing solely on acquisition possibilities meeting these tests, have achieved excellent results in recent decades. However, very few enterprises possess both characteristics, and competition to buy those that do has now become fierce to the point of being self-defeating.

The second category involves the managerial superstars - men who can recognize that rare prince who is disguised as a toad, and who have managerial abilities that enable them to peel away the disguise. We salute such managers as Ben Heineman at Northwest Industries, Henry Singleton at Teledyne, Erwin Zaban at National Service Industries, and especially Tom Murphy at Capital Cities Communications (a real managerial “twofer”, whose acquisition efforts have been properly focused in Category 1 and whose operating talents also make him a leader of Category 2). From both direct and vicarious experience, we recognize the difficulty and rarity of these executives’ achievements. (So do they; these champs have made very few deals in recent years, and often have found repurchase of their own shares to be the most sensible employment of corporate capital.)

From the Appendix of Warren Buffett’s 1983 Letter to Shareholders:

But what are the economic realities? One reality is that the amortization charges that have been deducted as costs in the earnings statement each year since acquisition of See’s were not true economic costs. We know that because See’s last year earned $13 million after taxes on about $20 million of net tangible assets – a performance indicating the existence of economic Goodwill far larger than the total original cost of our accounting Goodwill. In other words, while accounting Goodwill regularly decreased from the moment of purchase, economic Goodwill increased in irregular but very substantial fashion.

Another reality is that annual amortization charges in the future will not correspond to economic costs. It is possible, of course, that See’s economic Goodwill will disappear. But it won’t shrink in even decrements or anything remotely resembling them. What is more likely is that the Goodwill will increase – in current, if not in constant, dollars – because of inflation.

A business like that, therefore, might well have sold for the value of its net tangible assets, or for $18 million. In contrast, we paid $25 million for See’s, even though it had no more in earnings and less than half as much in "honest-to-God" assets. Could less really have been more, as our purchase price implied? The answer is "yes" – even if both businesses were expected to have flat unit volume – as long as you anticipated, as we did in 1972, a world of continuous inflation.

To understand why, imagine the effect that a doubling of the price level would subsequently have on the two businesses. Both would need to double their nominal earnings to $4 million to keep themselves even with inflation. This would seem to be no great trick: just sell the same number of units at double earlier prices and, assuming profit margins remain unchanged, profits also must double.

But, crucially, to bring that about, both businesses probably would have to double their nominal investment in net tangible assets, since that is the kind of economic requirement that inflation usually imposes on businesses, both good and bad. A doubling of dollar sales means correspondingly more dollars must be employed immediately in receivables and inventories. Dollars employed in fixed assets will respond more slowly to inflation, but probably just as surely. And all of this inflation-required investment will produce no improvement in rate of return. The motivation for this investment is the survival of the business, not the prosperity of the owner.

Remember, however, that See’s had net tangible assets of only $8 million. So it would only have had to commit an additional $8 million to finance the capital needs imposed by inflation. The mundane business, meanwhile, had a burden over twice as large – a need for $18 million of additional capital.

After the dust had settled, the mundane business, now earning $4 million annually, might still be worth the value of its tangible assets, or $36 million. That means its owners would have gained only a dollar of nominal value for every new dollar invested. (This is the same dollar-for-dollar result they would have achieved if they had added money to a savings account.)

See’s, however, also earning $4 million, might be worth $50 million if valued (as it logically would be) on the same basis as it was at the time of our purchase. So it would have gained $25 million in nominal value while the owners were putting up only $8 million in additional capital – over $3 of nominal value gained for each $1 invested.

Remember, even so, that the owners of the See’s kind of business were forced by inflation to ante up $8 million in additional capital just to stay even in real profits. Any unleveraged business that requires some net tangible assets to operate (and almost all do) is hurt by inflation. Businesses needing little in the way of tangible assets simply are hurt the least.

And that fact, of course, has been hard for many people to grasp. For years the traditional wisdom – long on tradition, short on wisdom – held that inflation protection was best provided by businesses laden with natural resources, plants and machinery, or other tangible assets ("In Goods We Trust"). It doesn’t work that way. Asset-heavy businesses generally earn low rates of return – rates that often barely provide enough capital to fund the inflationary needs of the existing business, with nothing left over for real growth, for distribution to owners, or for acquisition of new businesses.

In contrast, a disproportionate number of the great business fortunes built up during the inflationary years arose from ownership of operations that combined intangibles of lasting value with relatively minor requirements for tangible assets. In such cases earnings have bounded upward in nominal dollars, and these dollars have been largely available for the acquisition of additional businesses. This phenomenon has been particularly evident in the communications business. That business has required little in the way of tangible investment – yet its franchises have endured. During inflation, Goodwill is the gift that keeps giving.

But that statement applies, naturally, only to true economic Goodwill. Spurious accounting Goodwill – and there is plenty of it around – is another matter. When an overexcited management purchases a business at a silly price, the same accounting niceties described earlier are observed. Because it can’t go anywhere else, the silliness ends up in the Goodwill account. Considering the lack of managerial discipline that created the account, under such circumstances it might better be labeled "No-Will". Whatever the term, the 40-year ritual typically is observed and the adrenalin so capitalized remains on the books as an "asset" just as if the acquisition had been a sensible one.

From Warren Buffett’s 1984 Letter to Shareholders:

While there is not much to choose between bonds and stocks (as a class) when annual inflation is in the 5%-10% range, runaway inflation is a different story. In that circumstance, a diversified stock portfolio would almost surely suffer an enormous loss in real value. But bonds already outstanding would suffer far more. Thus, we think an all-bond portfolio carries a small but unacceptable “wipe out” risk, and we require any purchase of long-term bonds to clear a special hurdle. Only when bond purchases appear decidedly superior to other business opportunities will we engage in them. Those occasions are likely to be few and far between.

From Warren Buffett’s 2008 Letter to Shareholders:

This debilitating spiral has spurred our government to take massive action. In poker terms, the Treasury and the Fed have gone “all in.” Economic medicine that was previously meted out by the cupful has recently been dispensed by the barrel. These once-unthinkable dosages will almost certainly bring on unwelcome aftereffects. Their precise nature is anyone’s guess, though one likely consequence is an onslaught of inflation. Moreover, major industries have become dependent on Federal assistance, and they will be followed by cities and states bearing mind-boggling requests. Weaning these entities from the public teat will be a political challenge. They won’t leave willingly.