A news headline from San Francisco got me thinking about a larger economic and social issue. First, the news from California:

“San Francisco has become the first major U.S. city to pass a law that cracks down on the popular practice of giving away free toys with unhealthy restaurant meals for children.

San Francisco's Board of Supervisors passed the law on Tuesday on a veto-proof 8-to-3 vote. It takes effect on December 1.

The law, like an ordinance passed earlier this year in nearby Santa Clara County, would require that restaurant kids' meals meet certain nutritional standards before they could be sold with toys.

The San Francisco law would allow toys to be given away with kids' meals that have less than 600 calories, contain fruits and vegetables, and include beverages without excessive fat or sugar.

Backers of the ordinance say it aims to promote healthy eating habits while combating childhood obesity.”

I think this is very, very wrong for two main reasons: 1) freedom of choice; and 2) there are large differences of opinion on what is healthy and what is not healthy. Starting with the freedom aspect, let’s review one of my favorite answers from Jeff Bezos. In a 2001 interview, Bezos was asked “What does the American Dream mean to you?” His reply:

“I think I already answered it, because I think the American Dream is about liberty. But I'll add one other thing to what I said earlier. Liberty, giving people the freedom to do what they want -- as long as they're not hurting somebody else -- is super important. I think it's the core essence of the American Dream. I think at times we as a people get confused about it.

Passing a law that says you can’t give a toy as part of a meal if you are a restaurant is a severe violation of the type of freedom in which the USA was founded. How would you feel if you went to a restaurant and you were not legally allowed to order dessert? Or not legally allowed to order your favorite meal anymore because a law was passed prohibiting it because our country, on average, is too fat? Which starts to get at my second point. As readers who have read some of the health-related things I’ve posted (i.e 1, i.e. 2), I believe that a high-fat, low-carb diet is a healthy diet, and that a low-fat, low-calorie diet can be extremely unhealthy. I think saturated fats are good and that whole grains are incredibly unhealthy. Whether you agree with me or not on these things does not matter. What matters is that it will sound like gospel to some and completely crazy to others. There is the same disagreement among doctors and health professionals. They can all look at the same studies and data, and yet many very intelligent, rational people come to completely different conclusions. Yes, childhood obesity is a problem, but basing a law on something health professionals can’t even agree on in which the details depend on the beliefs and biases of the politicians making the law is wrong on a much broader, social scale in my opinion.

And of course, there is another area with similar opposing views and government intervention that is more meaningful to investors: economics. People’s thoughts on whether or not what the government and Fed is doing is right or wrong and helpful or harmful will be vastly different depending on whether or not they are a Keynesian, Monetarist or Austrian when it comes to economic philosophy. But what cannot really be disputed is that the size and extent of intervention and money creation is something that this country has never before seen. And it is being done in an environment similar to the health example above: intelligent and prominent people who have studied the data and centuries of economic history violently disagree on the eventual affects of recent actions, and the decisions are being made based on the opinions and biases of the majority at the top.

At a CFA conference in May, Seth Klarman described last year’s market as a “Hostess Twinkie market” because “….virtually everything was being manipulated by the government. Nothing was natural in the markets. Interest rates were held at zero, the government was buying all kinds of securities—notably, mortgage securities—and who knows what else has ended up on the Fed’s balance sheet.” He continued:

“I am worried to this day about what would happen to the markets, to the economy if, in the midst of all these manipulations, we realized that they are, in fact, a Twinkie. I think the answer is that no one knows, including those in Washington.”

And no one still knows, at least not for certain. The size of this intervention has never happened before. Species evolve through natural selection. Small advantages within a species create a higher probability of survival and reproduction that eventually leads the advantaged trait to become widespread. And the economies of countries are similar as well. The industrial and technological revolutions and the opening up of markets were some of the things that helped drastically change the global output of countries such as the US and UK compared to China and India from 1750-1980 and that have now allowed the latter countries to close the gap. 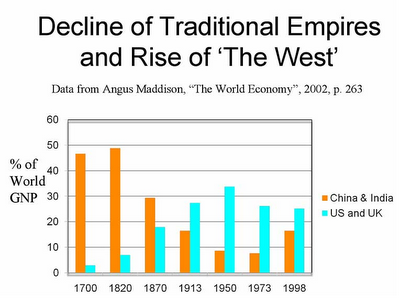 A free market economy is supposed to let the poor capital allocators, bad decision makers, and bad businesses fail and the good, productive, and innovative ones rise to take their places. That is how markets and economies evolve into a species better adapted to survive and thrive in the future. But the government and Fed intervention have either outright prevented (in some cases) or significantly slowed the process of creative destruction from happening. And slowing this process down is akin to slowing down the male praying mantis as he tries to escape from passing his genes along to a hungry female.

I believe that data and history prove that Ancel Keys was wrong when it came to his diet and health recommendations. A good comparison in economics to Keys in the health world would be Alan Greenspan and Ben Bernanke. Will their philosophies and interventions prove to be misguided? Have we given too much power to too few? Time will tell, but in 2008, Greenspan showed that getting the top position at the Fed doesn’t mean that you’ve figured it all out. When asked if his ideology pushed him to make decisions that he wished he had not made, Sir Greenspan responded with: “Yes, I’ve found a flaw. I don’t know how significant or permanent it is. But I’ve been very distressed by that fact.”