A couple of days ago, John Huber wrote an excellent blog post called What is Your Edge? I recommend it if you haven't read it yet, and (cue the confirmation bias) pretty much agree with every he said. As someone who spends much of my time looking at small and micro-cap stocks, it got me thinking about a couple of things that I wanted to write down here, as the writing process helps me keep thinking out loud.

First, I think this statement is entirely true:

I also think that many investors think they have found information in small-caps that others don’t have. One of the advantages of writing a blog is I hear from a lot of readers, and in the past when I have mentioned small cap stocks, I’m amazed at how many people have already researched the company I’m looking at, and have found the same information I found.

As both an investor and a blogger, I've experienced the exact same thing. It is hard to get an information edge in today's world, and if you are looking at small and micro-cap stocks, there are likely plenty of other people looking at the same ones, at the same time. I think the reason this happens much of the time has to do with earnings-multiple obsession. I think many people that claim to be following a value/Buffett and Munger approach to investing are actually taking the Ben Graham approach of going to the grocery store every day and seeing what's on sale (i.e. what looks cheap based on a given multiple), as opposed the Buffett and Munger approach of going to the grocery store every day and looking at one's favorite items (i.e. the types of businesses one would really like to own if they ever go on sale).

This isn't just about quality vs. cheap, or growth vs. value. As Buffett and Munger stress, growth is simply a component of value (sometimes a positive, and sometimes a negative) and almost everything is a bad value at one price and a good value at another price. But with small companies, there is often less of a chance for a durable moat to have formed around the business, which means extrapolating current earnings too far into the future (as a multiple is essentially implying) can often lead to what many people call a value trap—something that looks cheap on the surface but where margins, and thus earnings, may be at risk going forward. In other words, while it may be a good place to look, it also may be more likely that the business deserves to be trading at that low multiple. As Brian Bares said in an interview a couple of years ago, when asked about the biggest mistake investors make:

I would say that—especially to the value crowd that sort of follows the Buffett/Munger philosophy—it's this mistaken notion that a low P/E stock can potentially outperform.... Companies with low valuations on rule-of-thumb metrics like price-to-earnings, price-to-cash flow, price-to-book are often indicative, even in the small and micro-cap space, of broken businesses.

What might be the reasons for these so-called "value traps?" From what I've seen among smaller companies, the major reason has to do with underestimating the role of competition (which includes competitors that may not even exist yet, but that may be enticed to enter the industry if returns on capital are attractive, or capital is plentiful). As Charlie Munger has said: "We have found in a long life that one competitor is frequently enough to ruin a business." That quote is one that I always keep close at hand, as is this excerpt from Ed Chancellor's introduction to the book Capital Returns:

From the investment perspective, the key point is that returns are driven by changes on the supply side. A firm’s profitability comes under threat when the competitive conditions are deteriorating. The negative phase of the capital cycle is characterized by industry fragmentation and increasing supply. The aim of capital cycle analysis is to spot these developments in advance of the market. New entrants noisily trumpet their arrival in an industry. A rash of IPOs concentrated in a hot sector is a red flag; secondary share issuances another, as are increases in debt. Conversely, a focus on competitive conditions should alert investors to opportunities where supply conditions are benign and companies are able to maintain profitability for longer than the market expects. An understanding of competitive conditions and supply side dynamics also helps investors avoid value traps (such as US housing stocks in 2005–06).

Of course, the thing we are all looking for is a low multiple that doesn't deserve to be low because there is a long runway of profitable growth ahead. And if it doesn't deserve to be low and the growth transpires, then you are likely to get a re-rating as well as the growth, which can lead to the big home runs. But simply depending on a re-rating from a low multiple to justify investment is a tough game to play. And if one is willing to look 5-10 years out instead of the next quarter or year, then the multiple—unless at an extreme and especially at the higher end of that time frame—matters much less than whether or not one was right about the business. There's less competition in thinking this way, no matter what size company one is researching. As John concluded his post:

In summary, I think the “edge” is less about knowing more than everyone else about a specific stock, and more about the mindset, the discipline, and the time horizon that you maintain as an investor. Thinking long-term is a commonly talked-about potential advantage, but one that is much less often acted upon. If you are a professional investor that is set up to capitalize on this, or an individual investor who has the right mindset, you can give yourself a significant edge in the stock market. 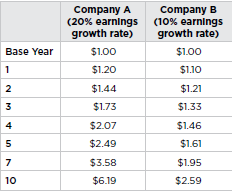 As a final note, it's also important to remember that looking and thinking long-term shouldn't come at the expense of the anecdote to hubris, overconfidence and, as Ben Graham described it, the "vicissitudes of time": Margin of Safety.