Richard Duncan: Why The Fed Will Launch Another Round Of Quantitative Easing

As I've mentioned before, I think Richard Duncan's book The New Depression is one of the few macro-related things worth reading. THIS video interview he did earlier this year also does a great job of going over some of his ideas, for those who want a shorter version.

And as further prelude to the macro-related article below, here's what I had previously written in another post about Duncan's book:

Richard Duncan's book, The New Depression, is one of the best things I've read when it comes to taking a complex topic and simplifying it down to its key variables. His explanation of the role credit plays in our economic world today is the best I've seen so far. And like most people who follow Warren Buffett and Charlie Munger closely, I remain skeptical about the ability to forecast the macro economy with any consistency. Richard has been pretty good so far in his predictions, but I pay attention to him more to help me understand what's going on in the present and how things work than I do to act on any forecasts about the future.

Link to article: Why The Fed Will Launch Another Round Of Quantitative Easing

And for an example of the way I think he's helped me understand some things that may or may not be directly useful to buying cheap stocks, consider the 3 slides below, which are from some of his Macro Watch videos.

The first slide pasted below is a slide where Duncan talked about how the Fed, in the 2004-2006 timeframe, raised interest rates but couldn't get the market rates to rise by nearly as much as they had wanted. Alan Greenspan called it a "conundrum" at the time. 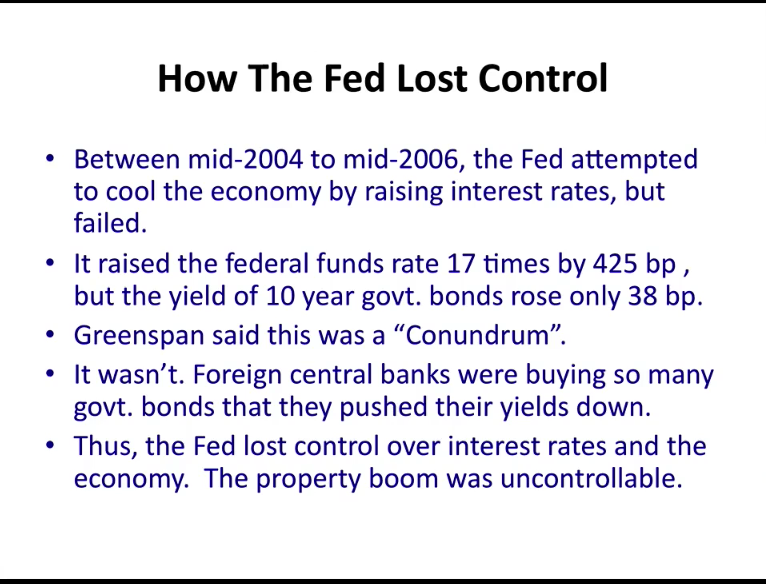 The second slide pasted below essentially explains the reason for the "conundrum," at least according to Duncan. The current account deficit had grown increasingly large from 1996-2008, and exceeded the budget deficit by quite a bit. Foreign central banks (especially China) generally purchased U.S. assets with the U.S. dollars they received from running trade surpluses with the U.S. so that they could keep the value of their currencies down. When there weren't enough new U.S. treasuries being issued because the budget deficit was lower than the current account deficit in the U.S., those foreign central banks had to purchase other things, which in general were previously issued  U.S. government debt or those of Fannie, Freddie and private issuers of asset backed securities, as can be seen in the third slide below. 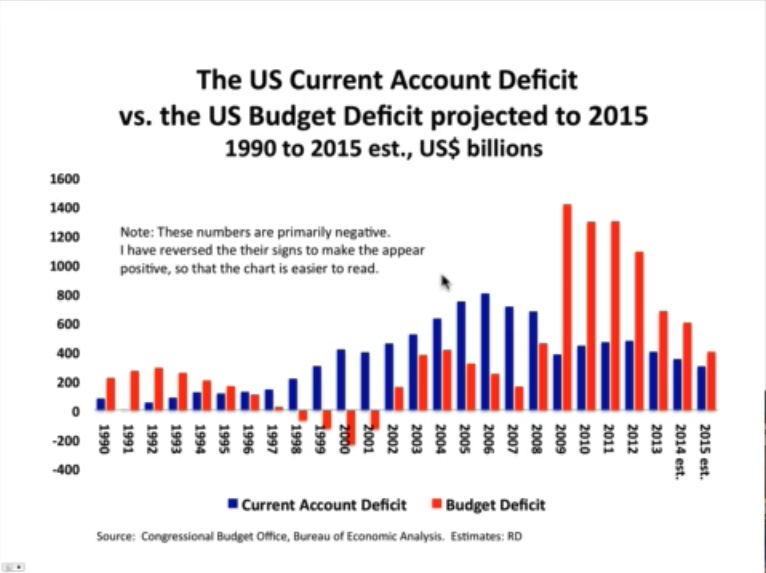 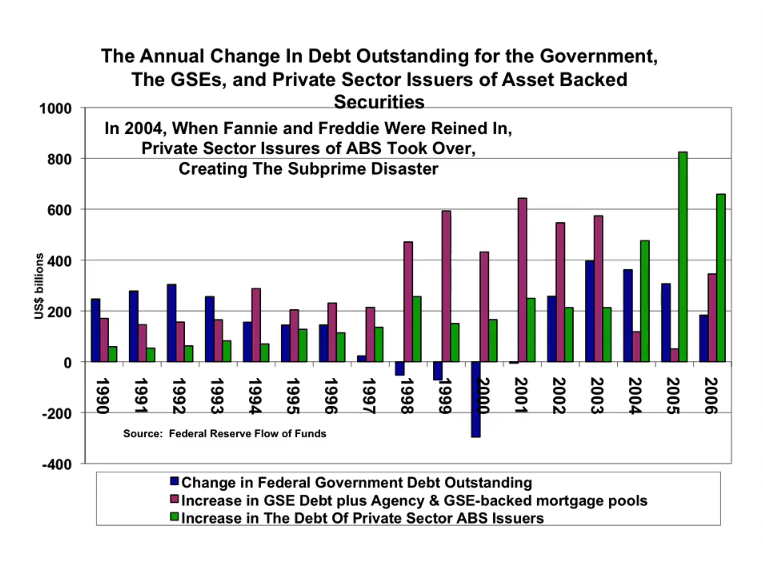 In Poor Charlie's Almanack, one of his checklist items is to "Always beware of inflation and interest rate exposures." What Duncan's work has helped me realize is just how complex and how many moving parts there really are that can affect inflation, interest rates and other macro outcomes, and that even those at the top of the world's central banks can have a hard time figuring out what their actions will lead to.

And getting back to QE, if you look at the second slide above, you see that the budget deficit exploded above the current account deficit when the Great Financial Crisis hit. That is where QE came in and without it, interest rates likely would have moved much higher as there wouldn't have been enough demand for the onslaught of supply of U.S. government bonds without Fed purchases.

One more point that is useful for me is that I try to be as objective and humble as possible when looking at all of this stuff. It is interesting to learn, but also important not to form too strong an opinion on whether certain past actions were right or wrong, and especially important not to use what one learns to forecast what one thinks will happen in an unpredictable future. I think the key is to use knowledge gained to try and think about and identify risk, not forecast. In short, be a risk-identifier, not a forecaster.